The Washington State Patrol is reporting that a wrong-way vehicle collision killed a 19-year-old woman on I-5 near the S. 188th Street exit in SeaTac on Thursday night, Sept. 22. 2022.

Troopers say that the collision was caused at around 11:26 p.m. when a wrong-way vehicle traveling southbound in lane five of the northbound lanes of I-5 struck another vehicle head-on traveling northbound in that lane.

The victim vehicle became fully engulfed in flames and the 19-year-old female driver was killed.

UPDATE Sept. 23, 2022:: The 46-year-old wrong-way male driver was transported to Harborview Medical Center in Seattle, where he later died.

Identity of the victims have not yet been released pending notification of next of kin.

The freeway was blocked for aprroximately three hours. 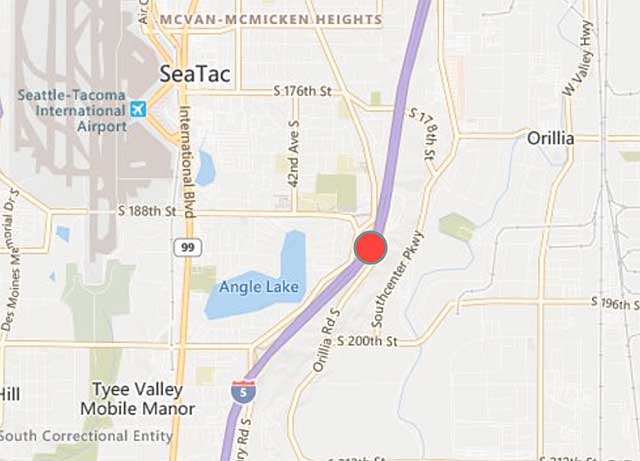 Currently, all lanes NB I-5 at 188th are blocked due to this earlier incident in Tukwila. https://t.co/Jc4yd88UmI pic.twitter.com/yaS294cwAJ

Puget Sound Fire, Tukwila FD, SKFR, and Medic One on scene of a serious vehicle collision NB i5 at the S 188 on ramp, all lanes are closed. WSP is investigating, expect long delays. pic.twitter.com/pfZfK6tDV8

#BreakingNews #HappeningNow #TrafficAlert – @Southkingfire, @PugetSoundFire, @tukwilafd, @KingCoMedicOne, and @wspd2pio on the scene of a two vehicle head on collision with one fully engulfed on NB I-5 at S. 188th in SeaTac. pic.twitter.com/CwDEg4xDT9