This turned out to be another great year for movies, especially down the stretch, and I could probably recommend as many as fifty that I enjoyed. Honorable mentions include Ad Astra, A Beautiful Day in the Neighborhood, Dolemite is My Name, Ford v Ferrari, The Irishman, The Kid Who Would Be King, Little Women, Ready or Not, and Rocketman. Among all the movies I saw this year, though, the following are the ten cinematic experiences that stood out the most.

Movies I Would Recommend to Everyone: From Casual Moviegoer to Film Buff

This documentary was an incredible cinematic experience and those lucky enough to experience it in IMAX will likely never forget it. The recreation of the 1969 moon landing mission was edited together from hours of film and audio recordings recorded during the actual event, including some previously unreleased 70 mm footage. High resolution digital scans of the footage were carefully created and the result is images that look as good as anything new you might see in theaters today. The documentary has no narration or new interviews; everything you hear was actual audio recordings from the mission and news clips from the time. The result is the closest many of us will ever get to feel like we were actually there for this incredible moment in history. Available to stream from Amazon, Google Play, Vudu, and YouTube.

As the culmination of multiple storylines that were set up over 11 years and 20 movies, there were incredible expectations weighing on this movie when it came out in April. It did not disappoint. From the surprising dispatch of Thanos within the first five minutes and the slow, shocking reveal that five dark years have passed with no resolution, to the crowd-pleasing final battle that brings all of our heroes back together for a grand finale, this movie is a thoroughly enjoyable adventure from start to finish. The final battle pays off every emotional beat established throughout the entire extended franchise, rewarding those who have been along for the whole ride. It is a perfectly satisfying conclusion to an impressive cinematic feat. Available to stream from Amazon, Disney+, Google Play, Vudu, and YouTube.

Director Rian Johnson reinvents the whodunnit genre with this relentlessly entertaining romp. “He might as well live on a Clue board,” says one of the detectives tasked with investigating the possible murder of a wealthy patriarch, who died by knife in the study. It is originally reported that he committed suicide, but someone has anonymously hired renowned private detective Benoit Blanc, played hilariously by Daniel Craig, and so far he has eliminated no suspects (Craig’s “donut” speech is an instant classic). The all-star cast includes Jamie Lee Curtis, Don Johnson, Toni Collette, and Christopher Plummer, but the breakout performance was delivered by relative newcomer Ana De Armas. Want to have fun at the movies this year? Then this is the movie for you. Now playing at the AMC Kent Station, AMC Southcenter, Century Federal Way, and Regal Renton Landing.

The most unexpected delight this year was The Peanut Butter Falcon, a heartfelt film about a young man with Down Syndrome and his journey to reach the small pro-wresting school he has seen advertised on old VHS tapes. Along the way he meets another troubled young man played by Shia LeBeouf (who had something of a career renaissance this year). The unlikely pair ends up journeying toward the wresting school together and forms an unexpected bond, complete with secret buddy handshake. This movie is heartwarming, charming, funny, and undeniably sweet. We should all only hope to be invited to Zak’s birthday party. Available to stream from Amazon, Google Play, Vudu, and YouTube.

The third chapter in the Toy Story series, released back in 2010, felt like the perfect conclusion to the series and the thought of a fourth chapter felt unnecessary. But Disney is not averse to risk giving us too much of a good thing and in this case, that is lucky for us. Toy Story 4 is every bit as entertaining as the previous three films and still finds a way to pack an emotional punch, even if we thought we were out of tears following the previous film (Buzz telling Woody that “Bonnie will be okay” really gets me in this one). The animation is unbelievably detailed and all our favorite characters are back, plus some new ones. When it comes to consistency of high quality, Toy Story continues to be the best franchise going. Available to stream from Amazon, Google Play, Vudu, and YouTube… but, oddly, not Disney+.

Movies I Would Recommend More to Film Buffs than Casual Moviegoers

Todd Phillips’ Joker asks a question that has not really been addressed in a big budget Hollywood film: how does a human being turn into the nefarious arch villain we see in all these superhero movies? It addresses the issue in a style that is a clear homage to the movies of Martin Scorsese, most notably Taxi Driver and The King of Comedy, even going so far as casting frequent Scorsese collaborator Robert De Niro. The movie is dark and scary—not in a horror movie way, but in a this-feels-so-realistic-it’s-scary way—and ironically still manages to be one of the most beautiful-looking films of the year. Even though we have already seen this character on the big screen four times—including one Oscar-winning performance—Joaquin Phoenix’s portrayal of a man reaching the end of his rope feels fresh, original, frightening, and mesmerizing. Joker may not give any definite answers, but it asks a lot of interesting questions and is a fascinating watch. Available to stream from Amazon, Google Play, Vudu, and YouTube.

Once Upon a Time… in Hollywood

This movie is Quentin Tarantino’s love letter to the Hollywood of his youth… a Hollywood that changed dramatically following the murders of rising star Sharon Tate and her friends in August 1969. Tarantino’s story focuses on a fading television star who lives next door to Tate, and his stunt double/friend/confidant—two roles made instantly iconic by stars Leonardo DiCaprio and Brad Pitt, respectively. Tarantino’s love and longing for the era and those who worked in it shines through in the period-accurate recreation of 1960s Hollywood, the use of actual radio advertisements from the time, and the devotion of a large portion of the movie to the filming of a pilot for a western television show. The director’s passion shines through and only continues to reveal itself more with each subsequent viewing. I’ve seen this movie four times now, more than any other 2019 release, and my affection for it has only grown with each viewing. Available to stream from Amazon, Google Play, Vudu, and YouTube.

Korean director Bong Joon Ho’s Parasite is ultimately about the disconnect between the upper and lower classes, but comes wrapped in a Hitchcock-style thriller that would make the master of suspense proud. A poor family cons its way into infiltrating the home of a wealthy family, only to find conflict where they least expect it. To say any more of the plot at this point would be a disservice, as the unexpectedness of where the story goes is part of the thrill of the experience. The movie ultimately transcends any language barrier and proves to be a funny, shocking thriller of the first order. Now playing at Seattle’s AMC Pacific Place. Due out on home video January 14.

An incredibly strange, black-and-white tale about two lighthouse keepers trying to maintain their sanity after being stranded on their small island following a storm, The Lighthouse is like nothing you have ever seen. The horn of the lighthouse blares constantly throughout the movie, a mermaid shows up at one point, and Willem Dafoe speaks like a pirate the whole time. Dafoe and Robert Pattinson go to some weird places here to deliver performances that are way over-the-top and yet a perfect fit for the tone established by director Robert Eggers. The movie is funny, strangely gorgeous, and unlike anything else the cinema has seen all year. Available to stream from Amazon, Google Play, Vudu, and YouTube.

Under the Silver Lake

This is a bizarre and not always comprehensible detective story that won’t be for everyone, but I am endlessly fascinated by it. Andrew Garfield plays a young man in L.A. searching for his missing neighbor, whose disappearance might somehow be connected with the disappearance of a local millionaire. His search takes him to weirder and weirder locations, meeting stranger and stranger characters, until he becomes convinced that there is some kind of overarching conspiracy theory above it all. It is the kind of movie in which I cannot explain everything that happens or what it means with any clarity, but I am obsessed with trying to figure it out. The destination may be unclear, but the journey is wild and rewarding. Available to stream from Amazon, Google Play, Vudu, and YouTube. 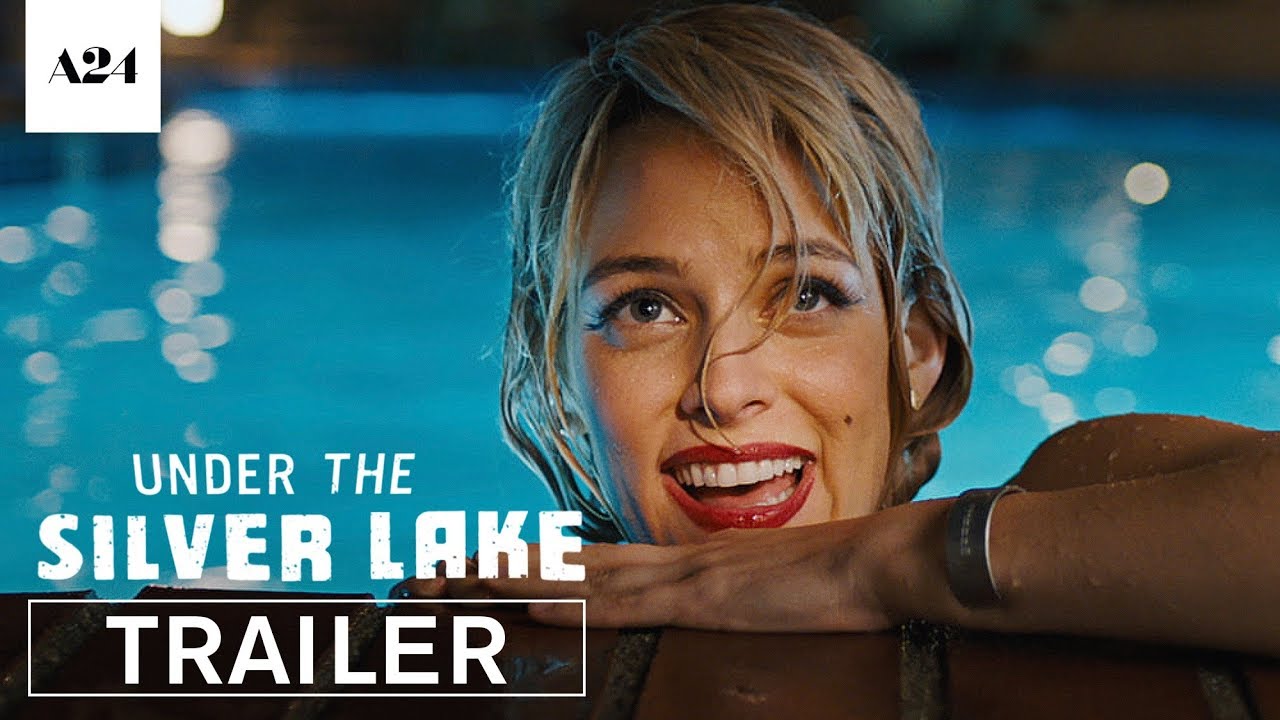