The Elephant in the Locker Room: Downfield

I’ve been comparing this Seahawks team to the 2013 Super Bowl-winning iteration since the beginning of the season. Other journalists are finally getting on board.

But one image from that Super Bowl season remains etched in my mind, an image that typified the 2012-2014 Seahawks: Breno Giacomini 60 yards downfield throwing a block.

Breno, you may recall, was number 68 before Justin Britt came along, and played right tackle. He was pretty notorious for false starts, holding penalties, and lots of unnecessary roughness. If I ever screamed at a lineman for stupid penalities, Breno was my target.

Here’s the thing, though. Breno was tough the way Kam Chancellor was tough. As with Kam, you knew that certain penalties would come with the territory… but Kam and Breno Territory set the tone. The tone was toughness, and the tone was intimidation.

So here’s what I saw last week in Seattle’s dominance of Minnesota. 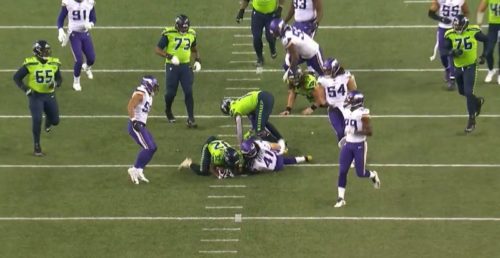 Ifedi, Jones, Fant, Hunt, and Brown all 10+ yards downfield blocking for Carson, with Fluker on the way “Do you see what I see?”, as the Christmas song goes?

What I see is the transformation of the offensive line in general, and Germain Ifedi in particular. I’ve carped as much as anyone about the deficiencies of the former 1st-round draft pick, and have gone so far as to call him a cancer in the offense. Over the last two years, though, this offensive line has elevated its game to a new level. And Ifedi has come along for the ride.

He’s even surpassed the level of Giacomini’s play.

Playing alongside D.J. Fluker and being coached by Mike Solari for two seasons has been a game-changer. When was the last time Ifedi was called for a false start or holding? When was the last time he completely whiffed a block, something he was famous for prior to Fluker’s arrival? I honestly can’t remember. Those mistakes used to be a hallmark of Ifedi’s game… without the benefit of Giacomini-style aggressiveness and effectiveness.

Now, however, that hallmark has disappeared, and Ifedi is part of tone-setting for an offense that runs over teams. And note that our linemen are not just ten to thirty yards downfield blocking for running backs, allowing them to rack up 200 yards on one of the best run Ds in the league; they’re also downfield blocking for receivers.

We can hope that our own D continues the surge it has experienced the last three weeks; but, barring some collection of catastrophic injuries, I’m betting on the Hawks for a return to the NFC Championship, at the very least, because of the tone set by this offensive… and guys like Germain Ifedi.