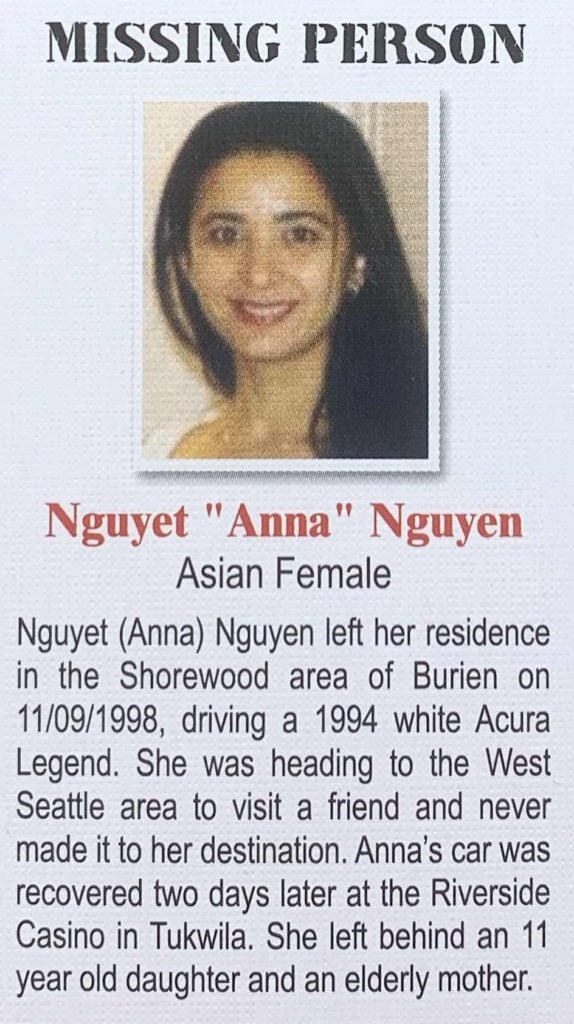 The King County Sheriff’s Office is reporting that it has made an arrest in a 1998 cold case murder investigation of a Burien woman.

On Oct. 25, police arrested Phan Kim Seng, 62, of Kent, alleging that he murdered 28-year old Nguyet “Anna” Nguyen. Detectives arrested him at his home in the 10000 block of SE 220th Street. He is scheduled to be arraigned Nov. 7 at the King County Courthouse in Seattle.

Police say that on the evening of Nov. 9, 1998, Nguyen, the mother of an 11 year-old daughter, left her Burien home, telling her mother she was going to visit her fiancé.

Nguyen has not been seen or heard from since that night over two decades ago.

Detectives suspected foul play early on in the investigation. Although Nguyen’s body has never been found, the King County Medical Examiner’s Office issued a death certificate for her in 2015.

On Nov. 11, 1998, Nguyen’s vehicle was located in the parking lot of a Tukwila casino. An ex-boyfriend of Nguyen’s (the suspect) was questioned regarding her disappearance. Although he denied having any involvement in her disappearance, detectives noted that he provided ever-changing stories regarding his whereabouts during the time in which Ms. Nguyen went missing.

In 2019, Major Crimes Detectives re-examined this case, along with its evidence. During this review, facts were gathered that weren’t previously known to detectives, leading them to further suspect Nguyen’s ex-boyfriend of being involved in her disappearance and suspected-murder.

On Friday, Oct. 25, 2019 – 21 years after he is believed to have murdered Ms. Nguyen – the ex-boyfriend was arrested by King County Sheriff’s Office Major Crimes Detectives and booked into the King County Jail on investigation of Murder.

“This is the fourth cold case our Major Crimes Detectives have solved this year,” said Sheriff Mitzi G. Johanknecht. “My Major Crimes detectives do outstanding work with limited staffing, and still no funding for a dedicated Cold Case Unit. Instead, they work these unsolved murders in addition to their heavy caseloads in the pursuit of justice and closure for the families who have lost their loved ones.”