On the surface, the new film The Kitchen looks like a retread of last year’s Widows and the opening montage does nothing to discourage the comparison.  We see each of the three leads interact briefly with their criminal husbands; one appears to have a loving relationship, another a distant one, and the third an abusive one. This is almost exactly how Widows opened, minus the intercut heist of the prior film.  After that, though, the two films depart on different paths, with The Kitchen proving to be more of a mob movie than a heist flick. 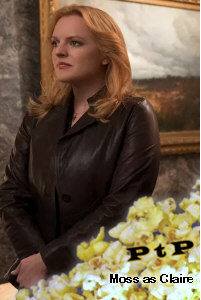 After their husbands are sent to prison for three years, Kathy, Ruby, and Claire find themselves financially at the mercy of the local Irish mob boss, Little Jackie Quinn.  Jackie promises to take care of them, only to leave them with envelopes of money far short of the rent Claire owes, or the needs of Kathy’s two children. Upon learning that the local business owners who have been paying Jackie for protection haven’t felt like Jackie was holding up his end of the arrangement, the trio decides to take over the business themselves.  Before you know it, they are running the titular Hell’s Kitchen neighborhood.

It really is before you know it, too, because this entire section of the plot—which the advertisements suggested might be the whole movie—is over within twenty minutes of the opening credits.  The rest of the movie focuses on the trio’s interactions with the leaders of the surrounding neighborhoods, including the powerful Italian mob boss of Brooklyn.  They are also forced to deal with the cops, the early release of their husbands from prison, and their own conflicting personalities.

The opening hour of The Kitchen feels as if it is racing through plot points faster than it should be.  The movie is based on an eight-issue Vertigo Comics graphic novel from 2015 and an eight-episode television or streaming show might have allowed the material to breathe a little more; but as a movie, the rushed journey through plot points never allows the film to establish a rhythm.  The movie does settle down a little for its stretch run, providing the movie with a few clever, unexpected plot turns, and one pretty disastrous one that goes absolutely nowhere.

The Kitchen benefits by having a trio of at-the-top-of-their-game actresses in its lead roles. Cast after her breakthrough role in Girls Trip¸ Tiffany Haddish tackles her first dramatic role as the power-hungry Ruby and she feels right at home in the role. Melissa McCarthy, another actress who broke through in broad comedies, is the practical Kathy, trying to do whatever it takes to make sure her children are safe, and she is great as always.  Then there is Elisabeth Moss as Claire, the victim of an abusive relationship who comes to take joy in turning the tables on her abusers.  Moss is a standout, providing much of the movie’s dark humor, and adding to her already terrific year that includes the latest season of The Handmaid’s Tale, a supporting role in the box-office hit Us, and the starring role in the critically lauded Her Smell.

While the three leads are great, there are a few questionable choices made by some of the actors in the smaller roles, resulting in some of the movie’s unintentional comedy.  The movie does have its own sense of humor and isn’t afraid to tell a gag, but it is easy to tell the difference between the laughs that were intentional and the ones that weren’t.

Screenwriter Andrea Berloff takes the directing reins for the first time in her career and while she certainly pulls off the mood and the look of 1970s New York, the rushed first half and some ham-handed foreshadowing show her inexperience.  The Kitchen certainly had its moments and is worth a look for its stars alone, but by never really finding its groove it falls short of being must-see summer entertainment.

The Kitchen opens today at the AMC Southcenter 16, the AMC Kent Station 14, the Century Federal Way, and Regal’s Stadium Landing 14 in Renton.