From our friends at the Kent School District:

Last week, the Emerald Park Elementary School library erupted into applause as David VanHoomissen was announced as the 2019 Kent School District Teacher of the Year.

His colleagues gave him a standing ovation for his many years of preparing students for success.

VanHoomissen teaches sixth grade at Emerald Park and has been teaching there since the school opened in 1999. 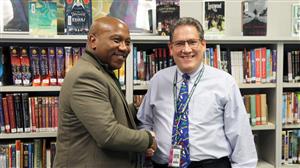 “It’s a big surprise. You always feel you’re doing your best for the kids and you’re a good teacher, but this is just the frosting on top of the cake,” VanHoomissen said.

“Mr. VanHoomissen is an excellent example of the dedication of every one of our KSD teachers provides on a daily basis,” Chief Human Resources Officer Moriah Martin said. “He cares deeply for his students. He cares deeply for the community. And he really exemplifies what this wonderful profession is all about, which is not just providing curriculum teaching, but also caring about students and their families.”

Christie Rosengren’s daughter is currently in his class and her two older children also had him as their sixth grade teacher.

“Mr. VanHoomissen is an exceptional teacher,” she wrote in her nomination letter. “He really wants what is best for each child. If it is the smartest child in the class or the one struggling, he will be there to help them achieve their goals.”

When VanHoomissen isn’t in the classroom, he seeks out additional ways to support his students.

“I attend dance recitals, music performances, theater productions, sporting events, religious ceremonies, as well as class organized outings, I was even in a school flash mob at Kent Station,” he said. “Seeing students in a non-academic arena gives you, the teacher, a stronger understanding of who your students are and what makes them tick.”

“He builds relationships with all of his students and welcomes them into the classroom every morning,” Superintendent Dr. Watts commented. “He actively listens to students, responds to their needs, and celebrates their academic achievements and personal successes.”

His classroom features memorabilia from different colleges his previous students have attended.

“I ask my class each morning to learn like champions,” VanHoomissen said. “Champions work on improving their intelligence and talents, they challenge themselves, they learn how to overcome obstacles, they view mistakes as opportunities learn, they believe that effort equals success, and they revel in their own and each other’s accomplishments. I know they are already champions; I want my students to believe it too.”

He thanked his colleagues for helping him continue to learn and grow. “I work with a great team,” he said. “They keep me on my toes. They don’t allow me to get stagnant, and that’s the exciting part.”

Board Director Karen DeBruler said, “Teaching is incredibly difficult. It’s a huge job. And, I’m so pleased that David has been chosen as our Teacher of the Year.”

VanHoomissen has been on #TeamKSD415 for 25 years. He taught at Cedar Heights Middle School and was a first grade teacher at Grass Lake Elementary before making his way to Emerald Park.