The National Weather Service is warning of a colder weather system that will move into our area starting Sunday evening (Feb. 3) and continuing into Monday, with showers transitioning from rain to snow later as snow levels drop from north to south.

“Snow showers will continue across most of the area this evening into early Monday morning with heaviest snow expected overnight,” experts say.

Predictions are that between 1 to 4-inches could fall, but temps should start to rise Tuesday.

Also new in the latest forecast – snow showers may return Wednesday through Saturday of this coming week.

Snow could already be seen falling on I-5 near Bellingham at around 11:30 a.m.: 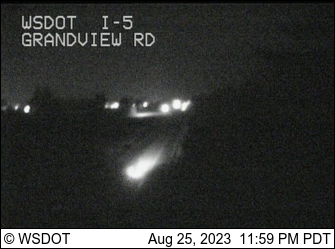 And in Lynden, WA:

It’s not just the snow, the wind is also in the weather forecast today. This is video from a @Q13FOX viewer Gilbert in downtown Lynden, WA. #Q13Fox #WAwx @ErinMayovsky pic.twitter.com/VjCI6f43At

SCHOOL CLOSURES?
If you’re a parent of a student (or a student) at the Kent School District, be sure to check their website or Twitter page @kentschools415 for updates on school closures.

A colder weather system will move aross the area today into
Monday. Scattered showers across the area this morning will
transition from rain to snow later today as snow levels drop fron
north to south. Snow showers will continue across most of the
area this evening into early Monday morning with heaviest snow
expected overnight. Given the showery nature of this system, snow
amounts will not be uniform with heavier accumulations possible
in stronger showers. Showers will decrease Monday morning as the
system exits south of the area. Commuters should monitor road
conditions Monday morning as slick roads may impact the morning
commute in some areas.

Cooler temperatures will arrive Monday and continuing into
Wednesday with highs only in the 30s and lower 40s and lows in
the teens to 20s. This is around 10 to 15 degrees cooler than
normal for the first week of February.