Director Damien Chazelle has stormed out of the gate onto the big stage in Hollywood.  He has only directed three feature-length films to date and each of the last two have earned Oscar nominations for Best Picture.  Two years ago, at only 32-years-old, he became the youngest director ever to win the Best Director Oscar for his 2016 musical La La Land.  The only real question haunting the young director’s career to this point has been whether the former drummer can direct a movie that is not music-themed or about the music/film industry.  That question is about to be answered in a big way with Chazelle’s next film First Man, an ambitious biopic of astronaut Neil Armstrong.  Spoiler alert: the answer is a resounding yes.

Instead of telling Armstrong’s entire life story, the movie focuses in on his role in the Gemini and Apollo space programs in the 1960s.  As the film opens, Armstrong is a test pilot struggling with a family tragedy.  To cope with his grief, he turns his focus towards his work and joins NASA’s Gemini program, the goal of which is to figure out a way to land men on the moon and then safely return them home. 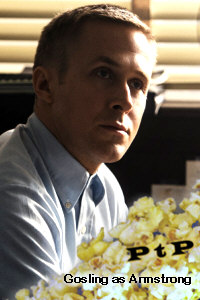 The movie follows Armstrong and fellow astronauts like Edward White, Gus Grissom, Mike Collins, and Buzz Aldrin throughout the decade as they perform various potentially deadly tests of equipment and spacecrafts, often with disastrous results.  “We must fail down here so we don’t fail up there,” Armstrong says after one test run goes sideways.  Meanwhile, the movie also spends a lot of time with Armstrong’s wife Janet, who says she married Neil because she wanted the simple life, but now spends her time wondering if he will come home from his latest journey to the stars, riding on top of what is essentially a missile.

There have been many great movies about space travel, both fictional and based on fact, but I doubt any of those movies have recreated the experience of what it feels like to be in the cockpit of one of those spacecrafts more realistically than First Man.  Whether it be the test planes that Armstrong is piloting at the beginning of the film or the Apollo 11 spacecraft he takes to the moon in the final act, Chazelle puts us directly in the pilot’s seat where we as an audience get to experience the violent shaking and ear-shattering noises the astronauts must not only endure, but within which they must make split-second decisions that could be the difference between whether they live or die.  It serves in not only being thoroughly entertaining, but giving us an even greater appreciation for these men whom we already generally consider to be heroes.

In between the signature rocket scenes, the movie delivers an intimate personal story of Armstrong as a man whose desire to go to the moon comes not just out of a desire to be the first, but out of grief for the loss of his daughter Karen, who succumbed to a tumor at the age of two.  He must also deal with the deaths of many of his colleagues as the cost to get to the moon comes not just in the form of tax dollars, but also in American lives.  “We got good at funerals,” Janet says at one point, something no one should ever have to get used to.

First Man does not sugarcoat it.  It is not a rah-rah space adventure, but a no-punches-pulled examination of the trials and tribulations faced by the brave men and women behind one of humankind’s greatest achievements.  It also doesn’t shy away from asking the question of whether it was the right thing to do.  There is a sequence in the middle of the film where the questions are asked whether the money the government is putting into its space program wouldn’t be better served going towards more terrestrial needs like cleaning up the streets or feeding the poor.  But in the end, the movie presents the Apollo 11 moon landing as an exciting, landmark achievement in human history with Ryan Gosling as Armstrong reciting the famous declaration about it being a giant leap for mankind.

First Man is a stunning technical achievement as well as an emotional one.  In addition to the incredible sound design that is key to the cockpit scenes, the movie features some stunning cinematography, especially in its second half.  And once the movie reaches the moon, the visuals and sound design combine to create an off-the-charts experience that is worth paying the extra charges to see it in IMAX if there is one near you.

Featuring terrific direction and excellent performances from Ryan Gosling and Claire Foy, First Man is definitive proof that Damien Chazelle is one of Hollywood’s brightest directing stars and I wouldn’t be shocked to find him gracing the Oscar stage once again this year.