New today on DVD and Blu-ray, this is a sequel which feels not at all like a retread. And that’s saying something.

While I’m saying things, though, let me say a little more. 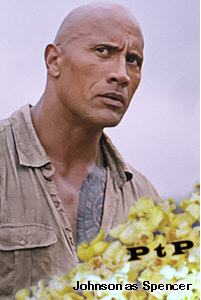 Based on this movie alone, I will posit that most sequels ought to wait 20 or so years before being made, and well after the stars of the original film are out of the limelight for one reason or another. About the only element connecting Welcome to the Jungle with the original Jumanji is the title… and the vague concept of the real world intersecting with a game world.

The tables are flipped in the sequel, however. In the original film, the board-game world of Jumanji invaded the real world in spectacularly dangerous and destructive ways. Welcome to the Jungle (and this is no spoiler) takes the idea a different direction as four high-schoolers on after-school detention stumble into the video-RPG world of an antique version of the game. Each of the four kids takes on one of the roles available, with surprising and humorous results. Nerds are transformed into superstuds, and… well, there is quite a bit of other fun attached to the conceit.

Once in Jumanji, the quartet is tasked with finding a lost jewel and restoring it to its proper place in order to save the world. As one might expect, each of them has a limited number of lives with which to fulfill the quest, and have various strengths and weaknesses. And they must discover and decipher various clues while encountering various other characters and picking up various tools and weapons which prove useful.

If it sounds like a lot of fun, then you’ve figured this movie out. Dwayne Johnson is at his best in movies like this, and I don’t think Jack Black has ever been more entertaining in a supporting role. All of the additional supporting cast members do a great job.

This is a super popcorn flick with just enough tension to keep things moving forward and just the right amount of humor to keep the tone light. That this is so makes sense, given that Jake Kasdan (Zero Effect, Walk Hard) is at the helm. He has excellent entertainment sensibilities.

If you missed this in the theaters, don’t miss it at home.

Welcome to the Jungle is now available to stream at Amazon and on Youtube. You can rent the DVD from Netflix.