An Army captain known for capturing and killing natives is tasked with transporting one safely across the frontier in director Scott Cooper’s new western Hostiles.  Christian Bale plays Captain Joseph Blocker.  Nearing retirement, Captain Blocker is given one last job that goes against everything he believes in when he is asked to accompany a dying Cheyenne war chief, whom he himself captured, and his family from New Mexico back to their homeland in Montana.  His rejection of the mission almost reaches the point of a temper tantrum, but ultimately it is a public-relations order that comes straight from the President of the United States, so Blocker must either comply or end up in captivity himself.

Shortly after beginning their journey, Blocker and his crew come across a young mother in a burned out home, mourning her dead husband and children.  After bringing the woman back from the grief-stricken edge of insanity, they set about escorting her to the next outpost for safety.  Along the way, Blocker begins to observe certain kindnesses extended to the woman by the Cheyenne family, such as offering her a clean dress to wear.  And perhaps more importantly, he observes the woman reciprocating.  This is the first of many plot points that begin to melt away Blocker’s hatred for the Cheyenne people whom he has always believed to be nothing but savages.  This leads towards a respect for the man he formerly considered a mortal enemy. 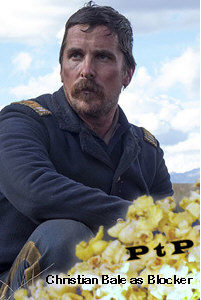 Although there are multiple scenes of violence, Hostiles is not simply about showing us violence for entertainment purposes. It is a contemplative Western, more so than an action Western.  It is about showing how violence affects not just the victims of the violence, but also the perpetrators.  In the beginning of the film, Blocker does not see his own actions as violent.  He is simply doing his job.  But as the movie progresses, he comes to understand how his actions were viewed through the eyes of the natives he was fighting, represented by the family he is transporting.

The point is driven home by a few scenes of violence committed against Blocker’s men not by another culture, but by men of his own race.  There are the white trappers who kidnap, beat, and rape the women, not discriminating between white and native.  And most poignantly, there is the fellow soldier accused of murder that Blocker is charged with taking to the gallows, even though he has done no crime worse than anything Blocker, considered a hero, has done himself.  And this violence is contrasted by the kindness of the Cheyenne and their willingness to step in and assist Blocker and his men, despite their history of violence towards them.

Hostiles is a stunning-looking film that holds up against some of the most beautiful films in the genre. Sunsets, wide shots of riders on horseback, landscapes, and even violence are given equal care when it comes to the visuals.  Rain, lightning, and fire are put to good use in portraying the state of mind of the characters at any time.  The film also feels authentic for the time period.  The costumes are finely detailed and the old west outposts appear to be the genuine article.  And it should come as no surprise that Christian Bale, always the method actor, has mastered the Cheyenne language.

The movie is about a slow journey from New Mexico to Montana and it sometimes feels like it.  There are some sequences that have very little going on in them and these are not aided by the fact that sometimes the actors draw out their dialogue with some extended pauses.  There is also some dialogue that would work for the story, if it weren’t for the fact that the lines are eerily similar to popular lines from earlier westerns such as Clint Eastwood’s Unforgiven.  For those who have seen the earlier movies, these lines may take you right out of the film.

The actors are all terrific.  Christian Bale always gets deep into his characters and Rosamund Pike goes all out as a woman on the verge of losing her mind after her family is killed, but she keeps it just short of going over the edge.  The standout in the supporting cast is Rory Cochrane as Blocker’s second-in-command.  It is Cochrane’s character and his eloquently-delivered soliloquies that set Blocker on the path towards redemption.

Hostiles is worth a watch for fans of Westerns and fans of movies that have a definite message.  The message of compassion and understanding for others not only works for the period piece, but should also resonate with modern audiences who still face similar problems all these years later.

Hostiles is now playing at the Meridian 16 in downtown Seattle, a limited-release engagement.